“Heroes” in Space and Time 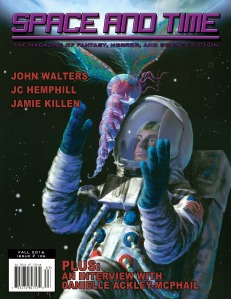 Most of my short story sales in recent years have been to anthologies, or book-length collections, so it’s fun to have a story appear in a magazine.  The Fall 2016 issue of Space and Time: The Magazine of Fantasy, Horror, and Science Fiction just came out, and it includes my story “Heroes.”  Although the magazine has not retained the same editor/publishers, Space and Time has been in continuous publication since 1966, so 2016 is its fiftieth anniversary.  You can order single issues of the current magazine directly from the Space and Time website and electronic issues from Weightless Books.

Space and Time is one of the longest-running of the small press magazines devoted to the genre of speculative fiction.  Such magazines contribute regularly to best-of-the-year anthologies and awards lists and are a viable alternative for authors who find it difficult to break into the few top-tier science fiction and fantasy magazines.  They offer exposure to an established network of readers and a paycheck as well.  It’s a win-win situation.

This entry was posted in Uncategorized and tagged Heroes short story, Space and Time magazine. Bookmark the permalink.