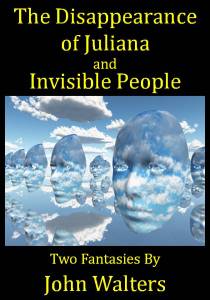 For five days, from Monday August 25th to Friday August 29th, the short story compilation “The Disappearance of Juliana and Invisible People: Two Fantasies” will be available for free download at Amazon.com here. Stop in and pick up a copy. Here’s what it’s about:

In these two related tales, a young artist being pursued by her abusive stepfather and a middle-aged man fleeing a terrifying incident from his past are recruited to join a society of people linked together by telepathy which exists completely outside the awareness of the present world system.

It’s part of my short story collection “Fear or Be Feared: Fantasies” which is available on Amazon here. Here’s a description of the collection:

A teenage girl climbing Mount Olympus with friends becomes possessed by an ancient Greek god who uses her as an instrument of vengeance.

A young artist pursued by her abusive stepfather is recruited to join a society of people linked together by telepathy which exists completely outside the awareness of the present world system.

Paranoia overwhelms a young college student as reality and fantasy merge in the midst of a drug trip that he realizes a dark power may be controlling.

During the British Raj an American reporter discovers a hidden valley in the foothills of the Himalaya ruled by a lovely but sinister woman who may not be human.

In these fourteen weird, surreal, frightening, and fantastic tales, unwary people discover that the world is very different from what they imagined.

While you’re there, stop in at my Amazon author’s page and peruse my other works.